For thousands of years birds have been used in the sacred wisdom of ancient cultures. They play a central part in many creation myths and are seen as messengers and are often associated with the journey of the human soul after death. Rising above the Earth, soaring to the Heavens and beyond Birds are symbols of freedom and power. Often serving as the bridge between the Human world and the supernatural.

The Egyptian God Benu bird created the Universe and then made gods and goddesses and men to live in that Universe. He was depicted as a long legged Heron. Other creation stories begin with the laying of a great cosmic egg from which the universe emerges. Sometimes mythological birds create more than just the physical world. Some cultures credit birds with creating their social orders and kingships. Like great Golden Winged Eagles that seem to pluck kings to the throne or lead great armies to battle victory.

Many myths link birds to life or death. These winged creatures were seen as carriers for the Human soul, flying up into the heavens. Sometimes the bird is depicted acting as a guide into the afterlife. Many cultures see the soul taking the form of a bird in the afterlife.

For as long as I can remember I have had dreams of flight and also of flying with great birds. All the dreams have been of great beauty and have left me feeling enlightened. Dreams of being carried by a great Eagle, other dreams of gliding down light filled mountains on a white Egret. This was when my Grandmother passed away. Bird dreaming often comes with healing powers and offer messages and insights.

I sit and listen to the birds early at first light, in the mornings before I go to paint in my studio.  The morning chorus is magical and connected to our being in some magnetic way. There have been so many times when I have been visited by birds. One of those special birds to visit is the Jabiru or Black Necked Stork. This wonderful character seems to appear to visit me when some very big event is on my journey path. This stork was even seen in Broome near my gallery on several occasions. Other times the gallery has had other visitations like a very rare Fairy Pita which found itself outside my gallery in January 2019. Only one other had been sighted in the Kimberley region.

There are many birds that have a common theme through many cultures like the Raven who are seen as Oracles or symbols of death. In Norse mythology Odin was always accompanied by 2 wise Ravens. The Eagle is associated with Royalty and was the symbol of Jupiter. Eagles are strong and fearless. Owls are a symbol of wisdom and patience.  Red Tail Black Cockatoo's are very sacred in Australian Indigenous culture, and when you see these beauties you know why. They catch my breath every time. Birds are weaved perfectly throughout our human mythology and our daily lives. They often go unnoticed yet are the source of such great beauty. 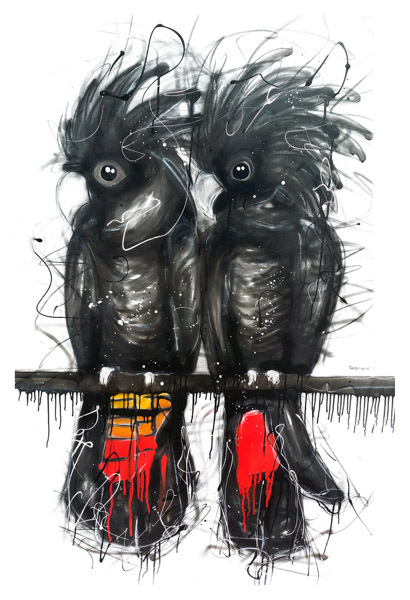